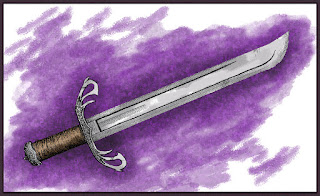 I awoke to a shiver rippling through my stiff body.  The cold had leached into my body while I slept.  A respite from my continuous exertion over the last few days, but the comfort of a bed continues to elude me.

The quiet reigned supreme in my tunnel that overlooked the chamber of discarded bones.  My little companion was near but not visible.  Slowly rolling over and pushing myself to my knees, I worked through my complaining muscles, stretching and pushing on the rough walls to get the blood flowing.

I took a minute to relax, allowing my breath to become shallow, listening for any nearby threats.  The process shifted into an almost overwhelming uneasiness.  The notion of emptiness under the tons of rock filled me with a dread of becoming one of the many unnamed dead below, with no need to shove dirt over my nibbled-on corpse.

I picked up my newly-acquired sword and stepped to the edge of the opening.  The floor below still sent my mind reeling, surveying the area littered with human remains… from what I could tell.  Those soldiers were right to fear what lived down here.  This ancient city was crawling with some vile creatures.

I made my way back to the stairs.  Simple enough.  I took my time, stopping to check for any activity.  Out and back up to the fortified landing, the wooden defenses remained empty of guards.  Torches led up the next set of stairs, and into a small room with two outlets, and beyond.  More arrows drawn with chalk on the walls and floor led me to a vaulted hall, pillars lining the expanse, sunlight as a backdrop on the far end, opening onto the Restorae plains.

Skirting the wall, towards the exit, the imp glided down from over my head to land on the ground.  Its claws scratched on the surface, the body shifting forward to peer ahead.

“Yeah, probably still down there,” looking back over my shoulder, “fighting off those brutes.”

“Bahito’ikins.  The pointy prudes call them that.  ‘Skin eaters’ be the words.”  His ridged eyebrow raised in amusement.

He smiled at that.

I realized he was not speaking in my head, but with his throaty, high-pitched voice.  He looked forward and skittered across the stone in a smooth, graceful movement, his wings folded up and his tail raised in a poised ‘s’ shape.  Then, he vanished.  Still a dick, though.

We crossed into the early morning light, reds and oranges fading into the blues painted across the sky.  Fresh air.  A warming breeze.  My body absorbed the renewed day on the steppes.  I grabbed onto the little pleasure, hoping to fuel what came next.

With a quick huff of breath, I jogged in a westward direction, attempting to keep a low profile.  Dune to dune, the process a back and forth effort, cracked sand crunching under my boots.  It seemed both a blur of movement and slow-going through the repetitive landscape.  The uneven field afforded piles of discarded masonry from old buildings and clusters of bramble trees and thorny bushes to hide my progress.

My growing ease ended with a twirled whistle to my right.

“We have movement to my left!” shouted a sentry from a raised position.  The call was answered with other perimeter guards and signaling hoots.

Rounding my next bend, a pair of soldiers slid down the side of a mound, attempting to block my path.  I gripped down on the tattered leather and aged wood of the sword and rushed them as they descended.

Reaching the first, his sword and hand shifted at his sides, keeping balance as he slid with the sand, with no time for a defensive posture.  I lunged in, my blade riding up his left thigh into the groin.  Then, using the abrupt stopping of my blade, my free hand closed around the wrist of his weapon hand, and wheeled my short blade around to come down where his neck and shoulder met.  A spray of blood and a shriek signified the end of his fight.

The other scout landed in a wedge between another mound, watching as his comrade crumpled to the ground in a heap.  He stood there in shock, a boy’s face wide and frozen.  I looked straight into his widening eyes, a smile growing across my face.  Yes, just enough to unsettle him more.  A shift and step forward into his guard, I slammed the pommel into his temple, knocking him into a dazed sprawl at my feet.

Moving off, I sped past a crumbled threshold and down what may have been a street at one time.  The sound of hooves nearing surpassed the pounding of my boots on the packed sand and dirt.

Two Tressian lancers skirted some brambles, to pull up on me from a side footpath.  Both were clothed and armored in a faded lavender livery, chain shirts clinking from the jaunting stop.

“Drop the sword and surrender yourself.”

When confronted with a moment that gives you an opportunity to say something clever, even though it might get you killed, only comes so often.  Unfortunately, all I did was shake my head and shrug my shoulders.

As fast as a wink, my little bastard of a friend materialized into existence in the face of the mouthy rider’s horse.  In response, the horse reared up while trying to prance backwards.  The awkward maneuver sent the horse and rider in a twisting fall.

The other lancer’s horse pulled at the reins, fidgeting away from the commotion.  The rider kicked the horse forward, securing his short lance in the crook of his arm.

I scrambled up the nearby mound, gaining some height and maneuvering behind a bramble tree for cover.

He rode past, unable to drive his lance home.  The rider led the braided mare around a section of collapsed stones to make a return pass, the wooded beaded mane waving about and ears prickling with anticipation.  I waited as he approached in long strides.  Raising myself onto my higher foot, moving me away from the lance’s tip, I swung with all the force I could muster at the lancer’s head.  The blade struck the coif covering the neck.  Not expecting the blade to cut clean through, heading flipping off the shoulders, I tumbled headlong and slid down the mound.  The loosed horse carried the slumped body into the steppe.

I jumped up and sprinted past the downed rider, the horse no longer in sight.  His body was in full convulsions, eyes and mouth wide, and bloody foam spilling out.  The imp sat on his chest, his barbed tail tapping the dying man’s nose playfully.

Glancing at the bloodied blade, I saw nothing to show the metal was stressed from the hefty blow.  More than just a well-crafted weapon.  Rounding a group of trees and a low wall, four soldiers turned to look at me as I interrupted their discussion.  The first raised his hands to his lips, giving out a loud, piercing whistle.  The two closest soldiers dashed forward, drawing their Tressian short blades.  The last unshouldered his bow and knocked an arrow.

I closed the distance on the charging men, using them to shield me from the archer.  A lanky man, stubble shadowing his chin, reached me first.  With reckless abandon, he swung a wide strike.  I stepped to the side, my sword taking the blow.  With a sure base on my back foot, I kicked with the front, more pushing him off balance and away.

An arrow whizzed by my waist.

The second Tressian stopped to gain position.  His pause allowing the first to recover.  Damn.

The whistler reached into a thicket of branches next to him, pulling out a double-bladed glaive.  He spun it up to rest on his shoulder, walking forward with a confident swagger.

He stopped halfway, looking over my shoulder with astonishment washing over his features.

Crunch… crunch…  A Raven-haired woman dashed in, crashing a buckler into the side of the tall soldier’s knee.  The joint moved in an awkward direction, contorting his leg and body.  He screamed from the overwhelming pain.  He was done soldiering for a while.

I sprung at the other, causing him to jump back.  I used his withdrawal to charge the bigger threat.

Another arrow passed inches from my head.  Using my peripheral, I watched as the archer drew back again.  Then, the archer’s neck sprayed out a gout of blood as an arrow protruded from the side.  He stood there as blood bubbled from between his lips.

The glaive-wielder crouched low, waiting for me to step into his range.  He wore the same lavender colors with added yellow adornments, marking him as having rank.  The Tres pushed in, bringing the blade down, arcing for my leg.  I retreated, still gauging my distance.  His swing continued into a follow-through slice with the other end, cutting through the air as he spun the shaft with some quick handwork.  That put me into a full defense, catching the heavy blade in mid-strike.  The force and his smooth movement displayed competence with the weapon.  We exchanged swings, mostly to avoid each other.

An arrow pinned to the ground near his foot.  Following back to its origin, Seth stood atop a pile of rubble, still dressed as a soldier.  He gave a quick waive of recognition.

The soldier’s next spinning attack came fast and hard.  I parried and dodged, being pushed back towards the flurry between the last soldier and the leather-clad woman.  The next attack across the front swung inches from my chest and I used its ferocity, taking my short blade and instead of a full parry, I pushed with his momentum.  His forward foot stepped wide, almost causing him to lose his balance.  Closing in, I grabbed at his wrist, just missing but gripping his hand.  I brought my blade high and away, taking him under the ear and jaw.  The man quickly pressed his hand to his neck, blood seeping from the wound, glaive falling free.

Posted by Tacitus Publishing No comments: