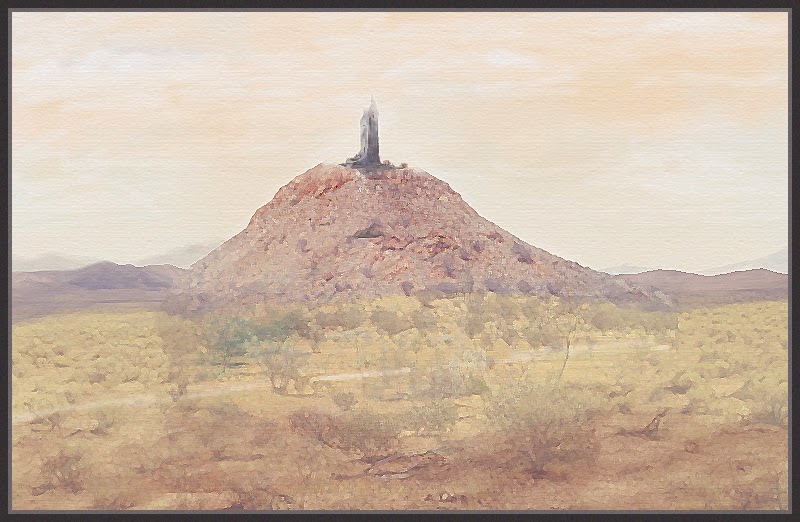 A chilled wind cut across the Restorae Steppes.  Winter was determined to arrive early, chasing away the last warmth and modest hospitality of the grassy plains.  I felt like a bare nerve exposed to the harsh reality of my situation.  Adjusting the chains as they bit deep into my chaffed and bloodied wrists, I looked up to notice we were nearing our destination.  To my left and right, a line of antiquated stelae stretched into the distance, marking the southern border of the Windruck Valley.

Four days had passed since leaving the ragged city of Gurda Churrac, and without food or drink.  All I have gazed upon in the last two days of walking in these infernal chains was the hindquarters of the horse that led me and the other captives.  Even my nightmares were plagued with the constant fear of horse shit blasting me in the face.  The tail was my only warning to such folly.  We broke off the Restorae Road from the caravan party we grouped with two days back and had made our way north on an overgrown trail, into rolling hills and prickly scrub.  Only the ever-present frost kept exhaustion from overwhelming me in this weakened state.

I learned of my fate from another prisoner, a rather twitchy Tressian, in quiet conversation one evening.  We were huddled away from the caravan’s people at night.  No one wanted to acknowledge our presence or show sympathy.  He understood that the Cherriza Lords who determined our sentencing still practiced an old custom of tribute, the 'Ulta in sun Sutuara'.  The Cherriza intended to chain us to some bridge of a remote tower, as an offering to their ancestral spirits.  Traditions be damned if you ask me.

Our wardens urged the horses into a quicker pace, pulling us down the little-used path, impatient to deliver their prisoners to their new perches.  Each soldier in the party was massive, a bear among men.  It would seem horses weren't the only things Tressians excelled at breeding.  They wore hardened leather stained in deep blues and varying shades of gray.  Heavy, fur-lined cloaks were draped over their shoulders, so that they may endure the land's frosty breath.  At their sides, a long, curved blade hung to one side and a beaded quiver to the other. Plenty of steel-tipped arrows for the short bows strung to their backs.  My chances of making an escape seemed slim but getting away from the main trade route was a start.

On the horizon, a lone tower stood upon a rocky rise, surrounded for miles by labyrinthine hedge-mounds.  This was deep into the old country, far from the city-states and the principalities' interests.  The few herdsmen that lived in the region and travelers on the Restorae Road were the closest thing to a sense of civilization encroaching on these lands for the past centuries.  As I understood it from local folklore, few pass through this valley for fear of waking the ancient dead.  The stories say souls lost in battle sleep in shallow graves among these dunes, waiting for the day to take vengeance on the living for their unending vanity to bring about war.  Such nonsense... but why take a chance.

A quick jerk sent me stumbling forward.  The climb was steep towards the tower, only a few remaining stone steps helped to mark the way.  The path ended at the base of a crumbling edifice.  A bare bridge extended over a jagged ditch that encircled the base, leading to its grated entrance that remained half-raised.  The slim strip of stonework had small sets of platforms extending from each side along its span.  Two guards pulled the first prisoner to a platform.  They attached the leg shackles to iron rings embedded into the center of a worn rune-knot carved into the stone.

My turn came after the third prisoner was secured.  I looked to the drop below as I stepped onto the bridge.  Rock and twisted shrub peered back.  The wind whistled through the aged stronghold and the crevasses surrounding the bleak scene.  I smirked at the thought that this was my end... my undoing.  As I placed my foot on the platform, waiting to be latched to the imbedded ring, a blue-white light shot upward into the sky from the platform's face.

"Woah, no," I pulled back, against the soldier's grips.

"Settle, boy.  Don't worry, you won't last too long out here," a toothless grin spread on the guard's face as he slammed his meaty fist into my stomach.  Their strength put me back on the platform with ease.  The light sprang forth again.

Something snapped in me.  My calm reserve shaken to the core.  "Stop!  Please!"  My eyes fogged over as exhaustion finally pulled me under.
Posted by Tacitus Publishing