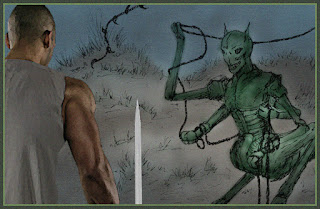 Son of a bitch.

The Tressian rider glared at Tae-gron and me with a gleam of vicious delight. He rolled his shoulders a couple times, as if loosening up for a casual skirmish. One of his meaty hands clinched down on a wicked looking saber. Banded-cut leather mail with steel ribbings encompassed his thick frame with a silver lion at the center. Hilts of various small blades poked out from strategically placed sheaths on his body. Strips of midnight blue streamers, wrapped around his knee and elbow rings, waved in the gentle breeze.

"Stop!" A vessik horse pushed through the line of riders with a finely dressed Tressian on its back. I don't know all the particular Tressian breeds but this one looked of finer blood. The horse lordling sat tall in his saddle, back straight. His beard was trimmed short and shaved to points, something Tressian lords found fashionable. Although, his leather longcoat identified him as a company captain, not a soft-handed, fashion-minded fluff.

I could hear the strain of the bows held by the archers standing to our rear, strings pulled to their ears, waiting for orders. I am sure they are looking for any excuse for some revenge.

"Stow your blade, Un-kar. Don't you see? We have a messenger." The well-groomed man looked me up and down. "Seems a little ragged and worn, though. Who are you and who do you ride for?"

I straightened, brushed the front of my chest off, "I am Sembani, messenger of Ki-fult. This is Tae-gron, my hired protection."

"I don't recognize that name... Ki-fult." One eyebrow lifted into a high arch as the other dropped, "Where is your bag and horse?"

I gave a slight bow, something traditional of the elven people to show apology, "We were beset upon by bandits. They outnumbered us and took what we had. There was not much given in way of refusal as we clearly had little choice, accept for a minor shoving match." Head lowered, I risked a side-glance towards Tae-gron. He stood on the balls of his feet and stone-faced.

"Well come, we are but a day out from the camp. The Restorae isn't so hospitable to those on foot.” The Tressian kicked his horse forward and around us, to continue along the trail. “I imagine your friend will catch up..."

Most of the day was behind us, so thankfully we only spent a brief time hustling to keep pace with the riders. You would think they traveled with extra horses in tow. You would... The scenery did not change much and there was no sign of Seth.  And I found myself staring at horse asses, again.

We set up camp in a grassy field, half-a-day’s ride from their, and I suppose now our, destination. The night air was mildly cool, but enough for me to shake with a chill in my sweat-soaked uniform. I stripped down to my small clothes to let them dry out and I took a squat close to the crackling fire. Tae-gron kept an eye on the light’s fringe around us, wringing his hands, looking edgy.

I slowly turned myself around, roasting my sides evenly, feeling the warmth spread. My clothes hung from the branches of a leafless bush nearby. I could only wonder how Tae-gron didn't shake out of his boots.

“Fellas, ya fellas?” A dimly lit face peered in from the gloom. “Ya come from the womb of Mannab, do ya?”

I looked at him, not sure if an answer was needed. An older Tressian, dressed in a loose carffe and head bound in a traditional lum, striped in dark greens and muted yellows, shuffled into view.

“The earth will spit out the unlikeliest of things.” He walked up to my recently borrowed sleeping roll, sitting without pause. His eyes would not leave me. “You provide a very different message to me, young messenger. I smell the fizzle on your skin.”

“Hey, Pops. Not sure what you are talking about here...”

Over my shoulder, I could hear we had another campfire visitor.

“Don’t mind Anshaur. He's more family than part of the company.” A Cassian joined our little group, with a twin-hand sword slapping his side as he walked up. He stood over Anshaur bare-chested with a bowl and spoon in hand. His hairy torso matched his oiled, black locks of hair resting on his head. “Name’s Mavrik. You the messengers Un-kar wanted to split open?” The cold didn't seem to bother him.

“I would imagine… What company is this?” My level of comfort was quickly dwindling. Their group numbered close to thirty, and I knew little about who we were about to spend our night with.

“We are the Azure Order.” He smiled as he took a sizable bite.

“I heard you were called in from the Empire to deal with some... issues…” While in Gurda Churrac, I had a lengthy conversation with a fabric merchant at a tavern who talked about how word had spread to the northern kounties of the Ardalian Empire. The Principalities had sent runners to well-known Tressian war companies to return home.

“Yeah, problems with some raiders up here, I guess.” He looked as if to say something more but nothing came.

A loud clanging, the sound of metal on metal, went out in a rush of swift bangs.

Mavrik looked towards the clamor, “Something spotted near the camp by the scouts. Probably just some mutts... trying to scare them off.”

Anshaur’s eyes said differently as they bounced back and forth.

One... two breaths… Anshaur was up and into the darkness, Tae-gron's gaze fixated on the perimeter, and Mavrik just shrugged it off and continued to eat.

Even in this cool night air, I could feel the temperature drop around me. Things were not right.

Just on the edge of our firelight, a snap and sizzle ignited our little camp. A sickly green haze, stretching out with vaporial fingers, crackled with whips of tiny, green-white sparks.

A soldier came running through our camp, bounding over a pack. From the haze, a chain wrapped in the phosphorescent energy lashed out to grab the Tressian by the throat and flung him from his feet, flying back into the blackness.

A creature lurched into the light, its body consisting of interlinked chitinous shells, the color of deep obsidian but displaying a sheen in grays, greens, and gold. Four arms extended from the torso, which sat on a shelled base with four legs moving in fluid steps towards us. The two upper arms ended in curled claws, gripping a long chain in each.

A chain sped out after a quick jerk from the creature. Mavrik dived into a roll, flipping his bowl at the thing, ineffectively glancing off its shelled body.

Tae-gron lifted a stout log off the firewood pile, taking a heavy stance, waiting. Cries began to ring out from other parts of the camp, warning of intruders. An arrow flew in, pinning itself to the creature's thorax. Another soldier rushed in from the blindside, sword held high.

The bug-like intruder slung its two chains in a twisted dance, cutting across the front of the attacker. The soldier dropped to his knees, his stomach sloshing out onto the ground. His sword fell backwards, landing near my feet.

I reached down and grabbed the hilt, crouching to move behind the soldier, using him as a shield.

The creature chittered and stepped forward. Tae-gron leapt first. The thing swung out a chain. Tae-gron used the log to block and let it spin around. With a heave, he pulled to expose the creature's side. He pressed with a leading kick and then a punch to its oblong head. The creature gave out a frustrated cry and snapped the other chain in a small, quick motion. It stepped back from the offensive as its attack came around, landing a blow across Tae-gron's chest.

Tae-gron fell into a roll, coming up onto a knee, face pinched with pain. Blood flowed freely from the wound. Mavrik stepped in front of Tae-gron, hefting his sword in preparedness for the next strike.

While it was distracted, I sprang forward, swinging in a wide arc to land on its left, upper arm. The blow cut clean through, severing the limb and sending a chain to the ground. I could now see the faintly illuminated chain also had little, hooked barbs on the links, meant to rend flesh from bone.

In response, the ghastly creature's other left hand reached out and seized my sword arm, hissing aloud. Its grip was powerful.

I looked into its voidish, black eyes, seeing the reflected firelight twinkle in response. An acidic smell filled my lungs, burning the whole way down.

I dropped the blade to my left hand, and slammed it into a thin crevice running the length of its thorax. The sword sunk deep.

The creature twitched and convulsed, ripping the sword free of my hand. A loud pop resounded in the camp. The creature disappeared, leaving behind an inky vapor in its place. The sword clattered as it hit the ground, free of the creature's body.

"You're not the only one who can use both hands."