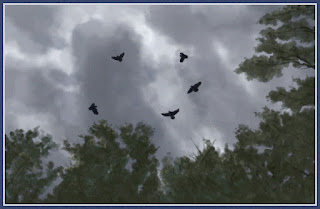 We made our way out of Windruck Valley.  Signs of life returned to the far-reaching countryside.  Sand finches darted from bush to bush, appearing as brilliant blurs of color chasing about the hillocks.  Further out, patches of wildflowers painted the landscape in deep blues and bright yellows.  A small herd of arroz grazed on a section of spotty grass with a large buck, great horns twisted to the sky, scanning the horizon.  The steppes would be a serene setting if I hadn't just escaped being left like a table scrap on a filthy floor, to be fought over by some depraved mongrels.

The Principalities of Tressekia were known to have sweeping, barren lands in the north.  These territories stretched out onto open plains with the occasional jagged mountain range breaking the monotony, which differed from the lusher farmlands and wilderness in the south.  Both had their allure, but I found the early hours out in the open to be the most pleasurable, even in this dreary mood.

I have traveled the main caravan routes through here a few times, but never this far off the main causeways in the north.  Having that cloud of isolation from civilization wrapping itself around my being was not an unfamiliar numbness but this extended sense of detachment fought to overwhelm.  And, my thirst was growing by the hour.

Loose sand kicked up behind my heels, passing through the natural grooves that split the brushy mounds.  Seth walked ahead with his head down, lost in his thoughts, while Tae-gron was to the rear humming a quiet tune.  At least Tae-gron didn’t seem phased.

The plan was to make our way towards the Restorae Road, then west, in the direction of Inna Bojarta.  The people there have little love for the Cherriza Lords or their brutish laws in Gurda Churrac.  The Principalities were broken into four territories after the king’s death.  His two sons took the two southern principalities while a cousin took the northwestern most lands.  Isolated in the mountains to the northeast was the fourth hold, Gurda Churrac, controlled by a council and its ‘False God’.

“Seth, are we in a rush?”  The fatigue from the ordeal was weighing me down and my legs screamed for a short pause.  “You think we can take a break?”

Seth continued in his daze… no acknowledgment.

Seth stopped and turned.  “Ah?”  His hands were twisted up underneath his shirt, attempting to keep them warm.

Shaking my head, “I need to sit for a few,” and collapsed on a high spot next to a brush-mound.  There was no complaint.

We spent the afternoon relaxing and building a bit of makeshift shade.  The sun seemed extra bright in the cloudless, deep blue sky.  It beat down steadily, mindless of the chilled wind that continually strafed the land.  I wanted the warmth but the glare was intense.

Tae-gron cleaned and cooked the skiver as Seth and I lounged, dozing off for short intervals.  Eventually, we ate half of the stringy beast while smoking the rest for later.

“That was almost suitable,” Seth looked at me with a greasy smile.

“I can’t wait to lie back in a real bed.”  Seth pulled off the last bits of meat from the bone and slung it into a neighboring shrub.  The nub was repelled back by a wiry branch and hit the ground nearby.

“I haven't passed through these lands in over five years, so things may not be so friendly.  Gurda Churrac proved to be not much different other than being swarmed with those Mannab shits.”

Gurda Churrac stands as the principal city of the ‘False God’ Innakza, considered a fringe holy place since the death of Motradon Dunche Guldren II, the last king of Tressekia.  In recent months, the Cherriza Lords pushed other noble families out and filled the vacant council seats, then elevated Innakza’s status among the Vetro Mannab Ohsutra, the ‘Mannab Pledges’.  I could care less about all the religious propaganda floating about, but the city was filled with mindless fanatics.  My business there was done… and proved to be a poor choice on my part to linger afterwards.

“I hope Inna Bojarta hasn’t lost its love of debauchery.”

“Agreed, my friend.  Would be a shame,” smiled Seth.

“You Tressians do enjoy yourselves to excess,” Tae-gron said while looking over his thatched smoking stand and checking the rear haunches sitting on a lower wooden platform.  It was an odd image to see such a large man act so careful, moving about the stand as if it were a delicate flower arrangement.  “We will have to be here a while longer.  Cooking slower with this hougdna.”

“Did I just hear you curse, Tae?” Seth gleamed with mischievous intent.

Tae-gron just gave him a quick glance, not to be goaded.

Later, I walked around gathering all the bones to bury, trying to avoid as much encouragement for scavengers to invade our little, quiet space.  As I stepped over to collect Seth’s arrant bone from early, it was nowhere to be found.  Must have already been grabbed by Seth or some rodent ran off with it as a prize.

We waited until Tae-gron was satisfied, and then decided to stay the night due to the late hour.  As I lay there watching the sky change as the sun sat on the horizon, my stomach slightly ached from eating too much.  Or, it could have been the lack of food over the past few days, and then eating something so rangy.

The next morning, we were up early and moving.   Once on the Restorae Road, we turned west towards Inna Bojarta, a city built on a raised plateau, making for a steady climb to the gates once there.  It can be an imposing sight to a new visitor.  To add, the stone walls only made the city reach closer to the heavens… but that did not promise anything better beyond those walls.  Cur-Motradon Mesra Guldren, cousin to the two sons of the dead king, ruled this northern passage, which was the wilder of the territories and lacked plenty of civility.

The first day went by quietly.  On the morning of the second, we finally quenched our awful thirst at a slender, running stream.  The water carried some silt so we headed up stream at Tae-gron's insistence to find a better spot.

Looking around the shoreline, I found a plant with large leaves, to create makeshift bowls.  Pulling leaves, I caught a glimpse of carrion birds circling above in the water’s reflection.

I passed Seth a handful of leaves, “I’ll be right back.”

I made my way through the cut and up a steep embankment, in their direction.  The ridge looked down on two bodies dumped below.  I climbed down, chasing away a couple of the buzzards in the process.

They were Tressian, dressed in formal messenger garb.  The sharp shoulder cut and burnt orange color of their coats marked them beholden to a particular manor, one I was unfamiliar with.  Kneeling down to get a closer look, they appeared to have been thrown from the ledge above, possibly to hide the bodies.  The smell was strong but they looked like fresh kills.  Both were peppered with arrows, some hafts snapped from the tumble.  Nothing on the arrows to mark them unique.  One of the messengers took them all in the back.  Sucks to die when running for your life.

A large raven glided down and landed on the back of a body.  It gave me a wry look and pecked at the twisted neck.

The bird only sat there and gave out a caw and continued to stare back.

“Get, you damned bird!” waving my hand as I wobbled in the loose sand.

It released another caw and bounced to the side.  The immediate jump sent me back onto my butt.  A squeaky laughter distantly echoed but yet seemed unnaturally in my head.

I looked about but saw no source.  The bird twisted its head and then the body seemed to shimmer.  The feathers appeared to retract back into its body and the beak was replaced by a tiny muzzle filled with needle-like teeth.  Where the bird once was, an impish creature stood with a grin… then faded away from sight.

I heard rocks sliding down the escarpment from behind.  Seth climbed down and looked at me with a questioning glance.  "Well, seems we have been gifted with a change of clothes."  He yelled up to Tae-gron, "Sorry big guy, nothing in your size down here."

Not sure what to say about what just occurred, I decided on a more silent approach.  Helping Seth, we stripped the two bodies.  I noted that neither had a messenger satchel of any kind.  We made our way back to the stream and scrubbed the garments to be more presentable and wash away some of the rotten stench.

We got back on the road heading west, which was little more than a trail at this point. The aged causeway that once ran through the steppes was now a dirt and gravel track. The stone bricks that paved the way have been scavenged over the past century for building material or been long buried with time.

On the third day, Seth spotted a faint dust cloud to our rear.  “Think we got visitors,” pointing eastward.  He scrambled up a nearby mound for a better view.  “Riders.”

I looked at Tae-gron for thoughts.  He had a scowl.  “I’m not feeling hospitable”

“Too far to tell who… but getting awfully close… looks like soldiers.  We need to make haste, boys.”  Seth slid down in quick jumps.

“Should we get off the road and let them pass?” I asked.

We turned in unison to find two Tressians fitted in hardened leather, bows knocked and aimed.  A black emblem of a roaring Tressian lion adorned their chests.

In half a breath, Seth darted behind the nearest mound, with arrows loosed into the sand where he last stood, missing their mark.  Tae-gron rushed one of the archers, smashing into him with a shoulder, sending the archer off his feet.  The other watched, pulling an arrow from his quiver, as his companion was struck.  I sprinted in low and grabbed the bow, pulling it downward.  The archer followed the jerk, his nose meeting my elbow’s backswing as he came forward.  His face exploded in a gush of blood and fell to the ground limp.

The other archer swung his bow around while on his back, to keep Tae-gron at a distance.  I moved to flank the stranger as Tae-gron grabbed at the flailing bow.  The archer’s wild eyes skipped back and forth, trying to see an out.

Hooves pounded all around, horses began to fill my vision.  Damn.

A thick-chested man slid out of his saddle, landing in the now formed circle of riders.  His dark hair was pulled back into a high knot, a fashion among Tressian horselords.  His face was weathered from continuous exposure and a scar followed along his jawline.  He wore similar hardened leather armor with the same lion emblazoned on his chest.  His hand pulled a saber free of its sheath with practiced skill.  His dark eyes looked directly at me, smile twisting one corner of his mouth.  “Shoute in fou un’shetan,” he said.  He spoke in Perussian, something that completely surprised me.  It was a simple greeting used when meeting the Fate of Death, something from my people’s folklore.
Posted by Tacitus Publishing