Devryn - Chapter 4 "The Chains We Bear" 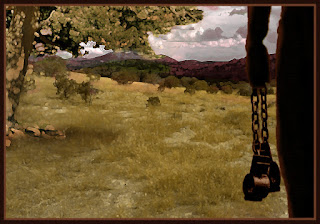 Devryn - "The Chains We Bear"

The morning air was cool and carried the dust of the land on its wispy breath.  If not for the aches and fatigue, I might have enjoyed the light-splintered sky.  If only. . .

Seth strolled out from the tunnel's shaded entrance smiling, flipping his wrists around to flaunt his freedom.  His tall, bony frame said he was not a pure Tressian and right now I wouldn't mind cracking open that smug face to find out.  He walked with a quick but mindful bounce through the rubble, one I have seen displayed by plenty of skilled pickpockets maneuvering through crowded streets.

Seth jumped up to a large slab.  "You gents sleep well?"

I looked down the bridge.  Dark patches on the stone said only the dead slept last night.

"Time to get outta here," Seth said in a lighthearted tone.

I wasn't sure that statement included me until he sat down in front of me and directed me to also sit.  Seth slipped a slender strip of metal into the leg-chain lock's keyhole and began working the mechanism.

"You've been locked up a few times before?" I inquired.

Seth looked up as his hands continued to work, "Ahh, you know.  People get the wrong idea."

I watched him test the pressure back and forth.  My stomach was grumbling with complaint but all I could think of was being grateful for Seth's past indiscretions.

"Interesting tattoo.  A guild thing?" Seth nodded toward my chest.

I looked down to see what he was talking about.  I don't have any tattoos.  I could see under a tear in my undershirt a set of dark lines.  Pulling away the shirt, a spiraled swirl spun around an odd symbol in black ink over my heart.

"Gods be cursed," trying to understand how this was possible.

Tae-gron broke the awkward pause.  "You girls hurry up braiding each other's hair so we can get out of here."  Tae-gron stood on his platform with arms crossed.  His dark Madraderian complex and knotted muscles made for an imposing form.  His black, curly hair was cropped close.  The hazel eyes seemed the softest thing about him.  He must stand almost a full head higher than me.

Seth shot back, "Hold your peace.  This isn't easy, you know."

Seth worked away at the lock.  Once I thought he broke the improvised pick after a loud click.  But most of my attention was on my chest.  The ink wouldn't rub off and my skin felt no different.  This could only be a bad omen.

My left arm was still sore and tender from the sciver.  The chain stopped the bite and the bruising was my mark of victory over becoming a sciver chew-bone.

"You know, last night I could swear there was something in that tower with me."  Seth looked over his shoulder scanning the serene structure.  "Probably my eyes playing tricks with the shadows."  He fell silent as he worked, not looking to elaborate.

The morning was spent unlocking my and Tae-gron's bindings.  We walked off the bridge, Tae-gron with his sciver slung over his shoulder.  A small triumph.  He looked at us and then to the sun, "So, which way?"

We entered the valley from the southern pass, crossing the ring of stelae used to mark the entrance.  The Restorae Road runs east and west, through the open steppes to the south of that.  Our choices were few beyond retracing our steps.  The valley was walled by the Tegrovva Mountains in all other directions.  All I knew of the area was through tales told by gnarled ladies and shadow-fearing locals, and nothing good worth mentioning.  To the north sat the ruins of an ancient city, its given name long forgotten.  The locals call it Battenfeld, translating to 'Hidden Home'.  Home to what?  I feared to ask and couldn't care less to find out. The fact I have not been this far north off the road and didn't know of this tower's existence, makes me question heading anywhere unfamiliar.

"South," I offered.  We looked to the south, I for any sign of favor from the gods.  Seems I'm a bit short of it.

"South it is," Seth confirmed.  "Besides, that's the fastest way to a warm meal and a full mattress."

The walk southward was without incident.  We could see the Restorae Steppes in the hazy distance, but knew the illusion of closeness was deceiving.

Tae-gron stopped and picked up a rock.  Watching him, he tested an edge to a piece of slate.  Dissatisfied with the results, he tossed it and kept walking. He turned to me as we made our way through two mounds, "Gonna need to skin and clean this up.  We eat good tonight."  For a big man, he had to be twice as hungry.

Looking over to Seth, he had a little height on me, but his lean body seemed fragile.  Accessing people, a trained habit that never went away.

"You know," Seth said when trudging up the next climb, "I still can't shake away that feeling about the tower."

"It was made of nightmares, for sure," Tae-gron interjected.

"I didn't see anything, but it felt like eyes were watching me from the shadows."

"Pshah.  Anyways, what put you on the platform?"

"What, indeed."  I was not in the mood for sharing.

Seth didn't wait long for an answer.  "I got caught in the wrong bed."

He gave me a quick shove down the slope.

"She happened to be married."  His grin made me bust out in laughter.  Even Tae-gron couldn't stop himself.

"Is that why they brought you out here?"

"No.  They think I killed a man."  That brought a round of quiet.

We walked on.  I know they wanted to ask, but they hadn't earned the right to an answer.  Someone had to die.
Posted by Tacitus Publishing