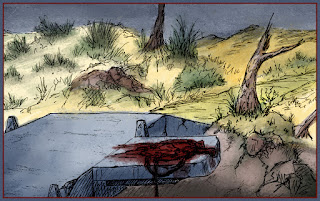 The chained prisoner closest to the embankment, a gaunt man dressed in sweat-stained underclothes, danced around his platform.  Whimpers and garbled words in a foreign tongue spouted forth.  Something I didn’t recognize, which was unusual.  But their meaning held no mystery… prayers to some god.

A gray streak closed the distance in a flash.  The sciver launched itself at the prisoner's raised arm, quickly pulling the screaming man to his knees.  A second and third rushed to join in the frenzy.  The cries of pain tore through the night air.

Not wanting to be something's evening meal, I began pulling at the large, iron pin that secured the ankle shackles to the platform.  Even with all my effort, there was not a slight shift or twist to promise my release.  With a great heave, I started working the chains back and forth.  Nothing.  I leaned back in an awkward crouch, tugging hard.  Fortune may have smiled on me since it didn't budge, because if I somehow did break loose, I probably would have launched myself over the edge from the sudden freedom.

Hearing a giddy laughter, I looked up as Seth's now open lock fell from his hand.  He quickly shuffled toward and into the dark tunnel, making his way into the bowels of the tower, chains clattering with his exit.  Damn that Tres.

The prisoner's cries changed to a gurgling sound, and then stopped.  Four scivers pulled on his flesh, pulling everything loose from the unfortunate man's open belly.  Entrails spun out and sagged off the edge of the platform.  Another sciver joined the fray, snapping at two to make way.  The two backed off and decided for another quarry.

The Tres next in line, across from Tae-gron, started screaming at the top of his lungs at the snarling scivers.  Three more dashed onto the bridge behind them, two without hesitation made for Tae.  The last was closing in on me, fast.

Tae-gron didn't hesitate to meet the first leaping sciver in midair, grabbing at the beast.  In the darkness, the two became one.  Tae-gron grunted, pushing the other attacking sciver off the platform to the rocky ground below with the body of the first.

I quickly spun the chain between the wrist manacles around my left forearm, just in time to take the lunging bite of the third.  The teeth bit deep, hard onto the links.  I could feel them crush down from the pressure as it shook its head in a growling rage, pinching the flesh underneath.  Part of the bite was making its way through when the sciver let go, blood ran down my wrist and fingers.

As it scrambled back, I gave it a hard kick, a solid thud to the side.  It didn't go over the edge but was enough for it to know I wasn't planning on becoming sciver scat.  The beast ran back towards the others, yipping in a high-pitched call, then back into the night.

Tae-gron and I watched as the remaining scivers tore flesh and limbs from their kills for the next few minutes before they too scampered off satiated.  Sitting on his platform, Tae-gron was still holding his dead sciver, I could faintly see him smiling with delight.

"Tae, you good over there?"

"Yeah.  The gods deemed that I should have a pillow tonight."  Tae-gron, a man of few words.  Couldn't ask for a better condemned bastard to share the bridge with.

The remainder of the night was spent in constant fear of their return.  Any small noise quickly woke me from my lethargic daze, eyes scanning for any threats.

I stared into the veiled darkness of the tunnel to see if Seth was coming back.  Nothing.  But I guess I could not blame him.

Tae-gron and I were the last two alive on the bridge.  The first prisoner was a complete mess.  His upper body was missing while the remnants were strewn across the platform, intestines dangled like vines from the edge.  The other lay in a pool of his own blood.

The frightful night crept to a close.  The sun peaked over the distant mountains, giving color to the valley floor.  Red was the color.
Posted by Tacitus Publishing