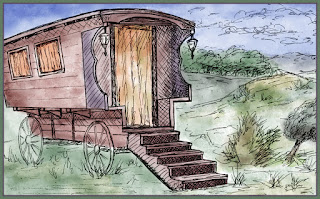 "Wait!" I screamed.  Father had me packing our wagon early, well before starting back on the trail.  The caravan had spent months on The Wayman's Crossing and we were finally about to reach the border of Llwynn.  The group camped here by a sizeable lake for three days while my father and a few others rode out to make contact with the nearby villages.  This was my first time leaving our Perussian homelands.  Father had completed this trip four times and tells tales of strange people and bizarre customs.  His last trip was right after I was born, nine years ago.  Mother would not have him leave again before I could join him.

I popped my head out of the back canvas tarp that covered the wagon to make sure she was still waiting. "One more to go."  She gave me that death glare, the one I knew I had to hurry.  My enthusiasm had faded quickly at the start of the journey, seeing that we encountered very little to be excited about.  Today felt different.

With a quick wrap-around and two knots to secure the evening tent in place, I was done.

Jumping out the back, I tried patting her on the head on the way to the ground, only glancing her shoulder.  And off we went to reclaim the old stone ruins on the hill.  Most of our time here waiting was spent perched atop the knoll, looking to the horizons, talking of what we might find in the beyond.

This final morning, everyone else was drowsily going about their early morning chores.  After so many weeks, the excitement of crossing the 'Vesutra in ve Colver', or Untamed Lands, was setting in.  We only encountered small tribal groups, never anything more interesting than a handful of herdsmen.  We did pass near the Sahanti lands but they keep to themselves, avoiding humans.  Father said they are a Fae people, not like us, and will have little to do with outsiders.

We sprinted up the rise, winded by our efforts.

"We weren't racing..." I squeezed out between huffs.  We may have been but she was older… and taller.  I could never beat her unless I was 'creative' in winning.

The hilltop was flat with the center paved over in a stone block circle.  Two trees found the strength to break through the man-made barrier and flourished.

Looking out, to the south beyond the camp lay a heavily wooded forest, the east and west open plains, and the north an edge to a lake that disappeared behind a cloud of mist suspended above.

"This one's mine," I yelled as I grabbed the lowest branch of the nearest tree.  With a hop, I began my ascent.

Merrin dashed over to the twin and climbed up to sit on a sturdy branch.

"What do you think is out there?" she looked to the west, our daily routine started.

"Father said we will first meet up with Llwyn traders.  Then the Eidonian elves have an empire somewhere beyond them.  He has been teaching me to speak their languages."  I pulled myself up to the final spot.  ”Wa arrin to'ka sa'feet."

"What the heck was that?" Merrin yelled over.

"An elvish greeting.  Father said it is formal speak."  I swatted at a bug buzzing around my face.

To the west, three horse riders crested a rise and were galloping in our direction.  I could pick out my father by his red shirt.  The other two split off to the camp while father made his way up the hill.

The chestnut horse snorted as it cleared the top.  "Abi, you finished?"

"Morning, Merrin.  You're father know you are up here?"

My father was always cautious, even though he was known for fighting prowess.  When he started to teach me to use a blade, I could only use the sticks I found on the ground.  And, he would still use his sword.  I hoped one day I could be like him… but I would be different.  If I were him, everyone would be scared of the name Devryn.

A panicked scream came from below.

"Abi, listen closely."  He wheeled his horse around.  "Take Merrin to the lake and head east until you find a place to hide.  You hear me?  You keep her safe!  You will be a protector one day.  Now run!"

--  He was wrong that day.  Even carrying his name, I never learned to be a good protector.
Posted by Tacitus Publishing