Devryn - Chapter 8 "Into the Mouth of the Abyss" 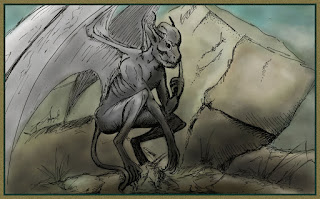 Devryn - "Into the Mouth of the Abyss"

I felt no immediate pressure of being chased through the camp, only a few heads turned at my passing. . . but I knew.

Making it to the edge of the escarpment I visited last night, I slid down its jagged side and into the ruins of the ancient city below, bounding side to side, ledge to ledge, to slow my descent.

Touching down, I sprinted into the first line of bramble-covered walls.  I sped past a decrepit, stone piling, hearing the skittering of falling rocks behind me, warning of the continued pursuit.  A small, black blur on a jagged wall caught the corner of my vision.

"Stop!" a male voice screamed from above.

Looking back, I could see the ridge’s edge.  She was up there, along with a group of half-dressed soldiers.  Some were making their way down, trails of dust marking their passage.

I rushed across a small open area, arrows peppered the ground around me.  I cut hard right into what once may have been an alley.

This way, a voice echoed in my head, pulling me left.  A collapsed building turned me back to the right, to a large, open sinkhole that extended out more than a hundred feet.

Down.  Down we go, said the same voice.  A small, onyx-skinned imp sat on a large block of stone at its rim, tail twitching back and forth.  The thing pointed at the drop-off.

With a hop, I began my descent.  The loose sand sped up the process almost too fast, putting me into a roll at the end.

The shouting of my pursuers said they were close behind.  What made me afraid was the rage of just one, though.

At the bottom, a dust-filled breath filled my panicked lungs.  A coughing fit followed.  Tangled brush walled in the winding path between the rubble that had been pulled down here.

Pushing off a low, extended wall that ran a small stretch, I launched myself over and into a small open area, a hollowed-out building’s interior.

Stopping to get my wind, I listened for any immediate warnings.  The near-silence was short-lived.

You run, you run, you run.  Hide your dirty ass, you must.  The creature sat on a pile of rubble, probing his nose with his forefinger.

“Bother someone else, you nasty pest.”

I inhaled deeply then exhaled in determination to slow everything down, then sprinted the distance across the space to pass under an arched threshold.  It opened into a small courtyard, now wildly overgrown.  Other house entries encircled the perimeter.

Devryn run from lady-ears.  She is angry with him.  It swung with a hand gripping a low-hanging branch near my head, wings stretching out to expose the veiny membranes.

A quick swat met empty air.  He was gone.

I crossed and passed under an arch into a heavy thicket, not expecting the prickly barrier.  I had reached the other side of the sinkhole.  Seeing a reasonably sized space to my right, I dropped to my knees and crawled forward.

The ground dropped into a small gully of sorts.  Scrambling to slow my short, uncontrolled tumble, I let myself fall flat.  The effort stopped me from falling into a wide burrow that led down into the earth.

A loud screech came from a nearby shrub.  Peering up, I could make out an odd bird.  It was not a bird in the normal sense.  Its body swirled, like smoke captured in a crystal body, with yellow, penetrating orbs for eyes.

Again, it called out.

Oh.  She knows where you are.  Stop your gawking while it’s squawking.  The imp now sat on my back, its claws dug into my shirt and skin.

“Maybe because your loud mouth,” I whispered through clinched teeth.

I looked again into the hole.  Something did not feel right.  The hairs on my arms stood up just thinking of what lies beyond.

The sound of boots crashing through the nearby brambles reached my ears.

“It’s only an empty burrow, right?  I won’t get my face ripped off.”  With that, I crawled into the mouth of the Abyss.
Posted by Tacitus Publishing