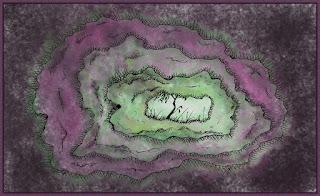 The crawlspace pushed tight against me as I wormed myself backwards, feet-first.  Jagged rocks stabbed into my back and sides, the grit rough on my hands and forearms.  The sense of an earthy weight pressing in did little to help.   But, the fear of capture fed my quickened, painful pace.

Footsteps rushed towards the entrance that now appeared a good distance away.  It slightly winked like an eye of white light as shapeless forms moved across the opening.  Staring forward, watching for someone to climb in, the imp’s murky-colored skin threaded together into existence, from empty space to a silhouetted pest inches from my face.

“Here!  Look around.  He’s hiding somewhere,” a guttural voice echoed in the space.

I pushed backwards, inching further into the darkness.  Tiny, clawed hands pushed on my forehead as if it would help.  Slide, slide.  They are looking for your ugly, monkey face. The oily words filled my brain.  He's such a little prick.

“Sergeant, a tunnel,” another said as a portion of the light source became blocked.

“Possibly an air vent into the lower section.  Stupid bastard,” said the sergeant, followed by chuckles.

“Shen Oni,” spoken in unison from several soldiers now outside the entrance, followed by scuffled steps.

“Where is he?”  The venom in the words stung.  She was there.

“He went below.  This area sits over the lower levels, from what I would guess.”  There was a pause.  “They will get him.”

Her voice cracked with her mounting anger from this chase, “WE will get him.”

I couldn’t see what was happening but the hair on my arms rose as murmurs filled the darkness.  Sound became dampened in my crowded world, like holding my head under water.

The stillness broke.  Faint sniffing.  I held my breath.

“You think you should fear the ‘eaters’…?”

Another pause.  No sounds of disobedience from her order, only boots racing away… and a low, deep snarl.

Her words, clear as if she laid next to me, “Here is something for you to run from, scared rabbit.”

The light became nearly blocked, a large swell of fur obscured my limited view outside.

She has a pet?

Grunts and the sound of the earth being sundered begged me to be quick to discover where this hole leads.

I continued my backwards crawl but found my escape was dropping out from under me.  My legs now extended over open air.

The beast was making some major progress.

The imp spun around in circles, Down.  I said down.  There is a forgotten city below.  Fate has brought you to its doorstep... or poop hole, whispered across my frantic thoughts.

I scooted until my lower half hung down the side of a rock face.  My boots struggled to find purchase on its surprisingly smooth surface.

You never listen…  In the dimness, the imp pursed his lips, drew up his hand, and blew a kiss.  A dense gust of hot wind pushed me from my uncertain perch, sending me over the edge.