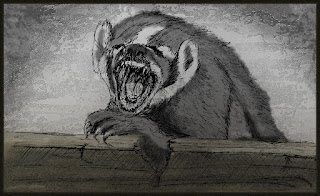 Blinding white light filled my vision as flashes of excruciating pain shot through my body.  My lungs screamed for breath, fighting to recapture my lost wind.  Why me?  Things are always so difficult.

The first drag of air included the dust that swirled about, dense and choking.  A coughing fit brought me back from the edge of panic.  The years of training did not prepare me for this, the simpler moments of fear.

The white went to black, to dull grays.  I laid on my back in a room lined with cubbyhole walls, some stuffed with what I would guess as rolled parchment and the such.  The shattered remains of the table that took the brunt of my fall lay scattered about.  Just hope the fall didn’t break me.

“Thanks for the vote of confidence.”  My mouth was filled with grit and the taste of blood.  My tongue probed a split lower lip.  “Tell me, oh wise lil’ shit, why I can see.”

“Seems your lovely tattoos aren’t only for decoration, you dim-witted ape.”  The imp sat on the edge of a nearby table scratching its ass.

“Hmmm…  Not sure.  Guessing you are running cause you pissed off some crazy elf bitch.”  It paused, looked at its finger and sniffed.  His muzzle cringed.

I pushed myself up, brushing the brittle shards free of my clothes.  “You said I called out.  The only call.  Called out what?”

“Hraxendeka.  The tower.  It called.  You called.  No one has tested in over a century.”  His crescent fingernail tapped at his temple as he looked to the ceiling.  “Maybe longer.”

Bits of dirt started spilling out from above.

“Oh, our friend is almost here.”  A faint giggle replaced his form at the table’s edge.

Adrenaline kicking in, I pushed myself up, looking for anything to defend myself.  Sets of long, dust-covered glass cases filled a few of the shelves.  The first was empty but second held a curved Tressian short sword.   Flinging the glass off, my hand grabbed around the rotted leather bands that wrapped the hilt.

Instead of the thundering crash I had the joy of experiencing, a mass of fur and claws adeptly landed where I once lay.  It’s massive badger head swung my direction, hissing forth its contempt.

That’s one big badger. He may bite.

I hate his impish ass.

Flipping the table that separated us, I crouched, ready to strike.  The moment was short-lived.

The beast barreled forward, crashing into the wood.  It held together, splintering at its weakest points.  A massive claw broke through, grabbing at the ground, tearing at the rock.

The badger paced backwards, then charged again, pushing the table and me against the wall.  Thanks to the legs, I wasn’t quite pinned.  With a swift stab downward, I grazed its shoulder.

A squeal of pain and it retreated to only pounce headlong again.  The impact slammed me against the cubbies, racks breaking apart in an avalanche of broken frames and crumbling parchment.  Again, another swing.  The dense fur repelled the sword’s edge.  The awkwardness of my crouching behind the disintegrating table was not helping.

Adjusting my awkward position, I rolled the hilt in my hands, pointing the blade downward.  The rabid monster pushed against my makeshift barrier, the table shattered in half from its continued clawing.  With a practiced jab on the other side of the table, the blade slid across the badger’s neck.  An immediate spray of blood was a great sign.  And it proceeded to gush forth, soaking the immediate area as it flailed its head about.

Weaker strikes at the failing wood were enough for me to push back, freeing my legs.  The ferocity ebbed, its breath slowing to a wheeze.  With a grunt, the bloody furball winked out of existence, a quick pop sound echoed.  Funny how its blood that covered me didn’t.

Trying to get some leverage, my hand punched through the wall as I tried to clear myself of the debris.  Looking closer, the small section was plastered over, meant to hide something beyond.  Inside sat a scroll wrapped around a gold-ringed roll, about a foot long.  Pulling it out, my hand heated up at its touch and an odd tugging sensation, as if a suffocating force was pulling at my soul.  There was no pain, more like an emanating vibration.

“Oh, tasty.”  The imp now rested on the upturned table’s edge, running its finger through the fresh blood.  “Find something?” its eyes looked into mine, licking its wet finger.
Posted by Tacitus Publishing